Emerging from the shadows, Disney’s Ghost Relations Department are specialists in bringing about the best “trans-spectral experiences” with help from mere mortals and meddling spirits from the next world.

The Ghost Post opened for a short time earlier this week, allowing only the first 999 US-based subscribers to sign up for a subscription. A rough estimate would suggest the number of subscriptions ran out in one or two days. For each person who signed up, it cost them $200 USD and the experience is staged over three months, with a new subscription box sent each month.

“Receive a series of Ghoulish objects from the cobwebbed depths of the Haunted Mansion”
– Ghost Relations Dept, Disney.

Those brave souls who signed up should start receiving their subscription boxes from March 30th.
Inside each box? A story awaiting to be discovered, with deep links to the stories of the ghosts who reside in the Haunted Mansion. The ghosts face a potential threat and are seeking out mortals to help them in their quest.

Looking through the Testimonials section, on the Ghost Relations Dept. website there’s an interesting one by Madame Leota, who hints at strife between employees in the department. The original employees have passed on while the new employees aren’t trusted and seem to be obsessed with “devices everyone seems so focused on” or phones. 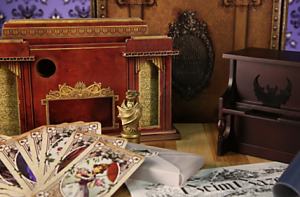 At least seven to nine “haunted” items will be in each box, embedded with spectral elements and secrets that can only be revealed via an app. The Phantom Radio iPhone app was developed to enable further investigation of the haunted items when the app is run across it and also allows a connection to hear the voices of the Haunted Mansion ghosts. In the T&C’s there’s an indication the app can be used within Disneyland and gameplay will adjust based on your location.

The team behind Disney’s Ghost Relation Department are Walt Disney Imagineering Research & Development (or Imagineers) and were also responsible for the alternate reality game, The Optimist in 2013.

Sources:
Inside The Magic
Stitch Kingdom