Escape Room is set to premiere at the 43rd Seattle International Film Festival (SIFF) this weekend.

Here’s the back story for the movie: To celebrate Tyler’s 30th birthday, his girlfriend Christen has booked an escape room to celebrate.

The six players walk into the room but the puzzles become deadly. Soon the players realise it’s not a game and they need to win.

And the same site shares this piece of dialogue from the movie – “Fuck this puzzle!” cries out one of the frustrated players in the face of certain death.

Bonus: The director Will Wernick will be attending both screenings.

There’s also no movie trailer for this Escape Room movie online yet. 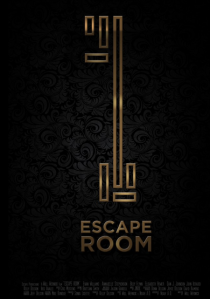 Escape Room
Director: Will Wernick
Tagline: Six friends test their intelligence in a game that takes a dark turn.